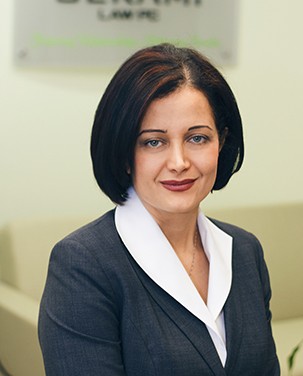 Arghavan Gerami is the Founder and Senior Counsel at Gerami Law Professional Corporation (‘PC’), a full-service immigration law firm in Ottawa, Ontario.  She completed her Juris Doctor and Master of Laws at Osgoode Hall Law School, York University and was called to the Ontario Bar in 2007. Ms. Gerami also completed a Master of Arts at the University of Toronto and an Honours Bachelor of Arts at York University, graduating first in her class.

Since founding Gerami Law PC, in 2011 Ms. Gerami has focused her practice on immigration and refugee litigation, and successfully represented numerous clients before the Federal and provincial Courts, as well as the various divisions of the Immigration and Refugee Board.

Before founding Gerami Law, Ms. Gerami worked at the Ministry of Attorney General and the Department of Justice. She also had the privilege of serving the Honourable Mr. Justice M. Evans at the Federal Court of Appeal on immigration and administrative law appeals.

Ms Gerami has been interviewed by national and local television stations on numerous occasions, such as the CBC and Global News, and quoted in national and local newspapers such as the Globe and Mail, National Post and the Ottawa Citizen.  Ms. Gerami has also published numerous journal articles and called on to speak at various immigration and refugee conferences and events across Canada.

Ms. Gerami enjoys spending time with her two children and husband, her miniature poodle (Bambi) and her cat (Simba), and she also loves to travel and practice yoga.

The Canadian Bar Association Immigration Law Section referred to Arghavan and one of her cases during a conference in Winnipeg to highlight the importance of lawyers, and their role in immigration. Please, play the video below to listen.