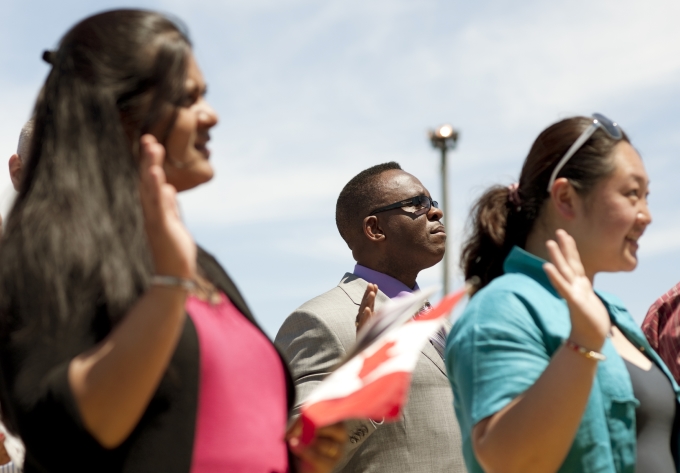 Our Canadian immigration and refugee lawyers at Gerami Law PC  are familiar with the requirements and the procedures involved for obtaining your citizenship and will ensure you are strongly positioned to succeed in this process.

The following table shows the changes in Citizenship Requirement in the recent years.

It can also be revoked for dual citizens for:

To qualify for applying for a Canadian citizenship you must:

Have been physically present in Canada for at least 1095 days in the five years immediately before the date of your application;

Have met your tax filing obligations under the Income Tax Act for three taxation years that fall fully or partially within the five years immediately before the date of your application;

Have an adequate knowledge of one of Canada’s official languages (if between 18-54 years old at the time of the application);

Demonstrate, in one of Canada’s official languages, that you have an adequate knowledge of Canada and of the responsibilities and privileges of citizenship (if between 18-54 years old at the time of the application);

Furthermore, you must not be:

Prohibited under section 22 of the Citizenship Act; and

Under a removal order and are not the subject of a declaration by the Governor in Council made pursuant to section 20 of the Citizenship Act.

Requirements for Applying for your Child’s Citizenship

Children who are permanent residents can become Canadian citizens by:

Applying at the same time as their parents, or after at least one of their parents has become a Canadian citizen, or

Applying once they meet the residence requirements, regardless of the intentions or citizenships of their parents.

The requirement that you apply at the same time as your child, or have already become a citizen has been repealed. As of June 19, 2017, minors can qualify on their own without the need to have a Canadian parent.

To qualify for citizenship as a minor, your child must:

Be under the age of 18 at the time of the application;

Have been physically present in Canada for at least 1095 days in the five years immediately before the date of your application;

Furthermore, they must not be:

Prohibited under section 22 of the Citizenship Act; and

Under a removal order and are not the subject of a declaration by the Governor in Council made pursuant to section 20 of the Citizenship Act.

Canada has two official languages—English and French. If you are between 18-54 years old at the time of the application, to become a citizen you must show that you have adequate knowledge of one of these languages. In general, this means you can:

Use basic grammar, including simple structures and tenses; and

Show that you know enough common words and phrases to answer questions and express yourself.

If you have been served with a Residency Questionnaire in the course of your citizenship application, this means you are required to provide additional information to prove your residency in Canada. We will prepare your Residency Questionnaire, explaining any travel history and working with you to provide additional supporting information. Gerami Law PC will strive to help you avoid any additional delays and to obtain your citizenship as soon as possible.

Impact of a Criminal Record on your Citizenship

If you have a criminal record, are facing criminal charges or have been ordered to leave Canada, you may not be eligible for citizenship. If you are on probation or are charged with a crime and waiting for a trial, Gerami Law PC would be glad to meet with you to discuss your case, and explain your rights and options.

You cannot become a citizen if you:

Have been convicted of an indictable (criminal) offence or an offence under the Citizenship Act in the three years before you apply,

Are currently charged with an offence under the Citizenship Act,

Are in prison, on parole or on probation,

Are serving a sentence outside Canada,

Are under a removal order (Canadian officials have ordered you to leave Canada),

Are being investigated for, are charged with, or have been convicted of a war crime or a crime against humanity, or

Have been convicted of terrorism, high treason, treason, or spying offences while you were a permanent resident.

To learn more about how you can obtain Canadian citizenship, please contact our office to arrange for a Consultation.