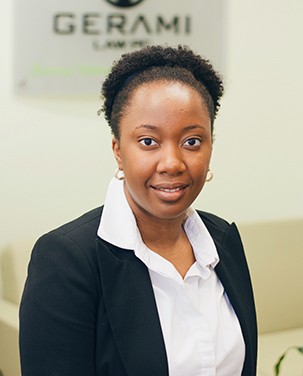 Ms. Jean currently practices in the area of Canadian immigration and refugee immigration law. She has experience in preparing permanent residency and temporary residency applications, representing clients on their refugee claims, as well as judicial review and stay of removal motions. Ms. Jean also regularly provides advice to clients regarding immigration consequences of a criminal conviction or sentence, pre-removal risk assessment applications, inadmissibility issues, as well as a range of other immigration and refugee matters.

In 2011- 2012 Ms. Jean worked at the Federal Court with the Honourable Justice de Montigny. Before joining Gerami Law PC, Ms. Jean was also a Litigation Analyst for two years (2012-2014) at Aboriginal Affairs & Northern Development Canada. In that capacity, she worked on Canada’s largest class action settlement agreement, analyzed the evidentiary records of all parties and drafted decision recommendations.

During her legal studies, Ms. Jean interned with the Honourable Pierre Isabelle of the Québec Superior Court. She worked as a Marking Assistant to Professor Rachel Grondin, evaluating 1st year criminal law examinations. She also served as a Research Assistant to the Honourable Marie Pratte of the Court of Québec (then Professor at the University of Ottawa), and to Associate Professor Francois Larocque. Ms. Jean also participated in the Laskin and in the Pierre-Basile-Mignault moot court competitions. In the latter, her team secured the SOQUIJ Cup for 2nd best factum out of 12 facta.

Ms. Jean is a nutrition enthusiast and relishes in experimenting with food in the kitchen. In her spare time, she enjoys travelling, and has visited Cuba, Morocco, Spain, Chile, and various cities in Canada and in the Continental U.S.