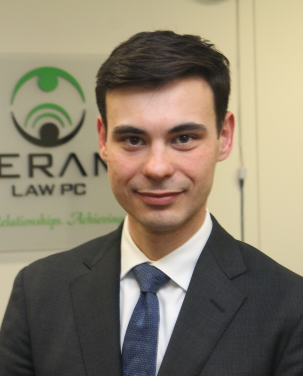 Jamil is an Ottawa based Canadian immigration lawyer and he is pleased to be an associate at Gerami Law PC.   Jamil was called to the Bar of Ontario in 2015. He holds both a Juris Doctor (Ontario law degree) and a Licence en droit (LL.L.) (Quebec law degree).   He completed his undergraduate in Business Administration at the Université du Québec en Outaouais.

Before joining Gerami Law PC, Jamil worked as law clerk to the Honourable Michel M.J. Shore at the Federal Court of Canada, where he gained an in-depth knowledge of the Canadian Immigration and Citizenship legal schemes.   He assisted on numerous immigration judicial reviews of decisions from the Refugee Protection Board, the Refugee Appeal Division, the Immigration Division and the Immigration Appeal Division.   He also dealt with a wide-range of decisions from Immigration, Refugee and Citizenship officers.   Beforehand, he articled at a large national law firm in Ottawa where he worked on a multitude of commercial and business related legal issues.   He also did an internship with the Department of Justice, in the Civil Litigation Section, and the Canada Agricultural Review Tribunal.   Recently, Jamil was an intern at the Special Tribunal for Lebanon in The Hague (Netherlands).

In his free time, Jamil is passionate about traveling to different parts of the world, cooking, as well as running. Jamil is also the proud uncle of three nieces whom he likes to spending time with as well as his friends.